The Dainty but Ferocious Damselfly

Our Transformation to Native Plants

The Dainty but Ferocious Damselfly

This dainty but ferocious male Sedge Sprite is perched on a Clethra flower bud with its leafhopper prey.

The very name Damselfly creates a docile image of these small insects that live in and around our pond.

But this is no damsel in distress. They’re ferocious carnivores with serrated jaws for feeding. Damselflies have a weak flight that is fairy-like in nature. Their bodies are slender compared to length that is only 1-2 inches with long, narrow, and clear veined wings. Unless you’re looking for one, they’re easy to miss moving about the vegetation, low around a pond. 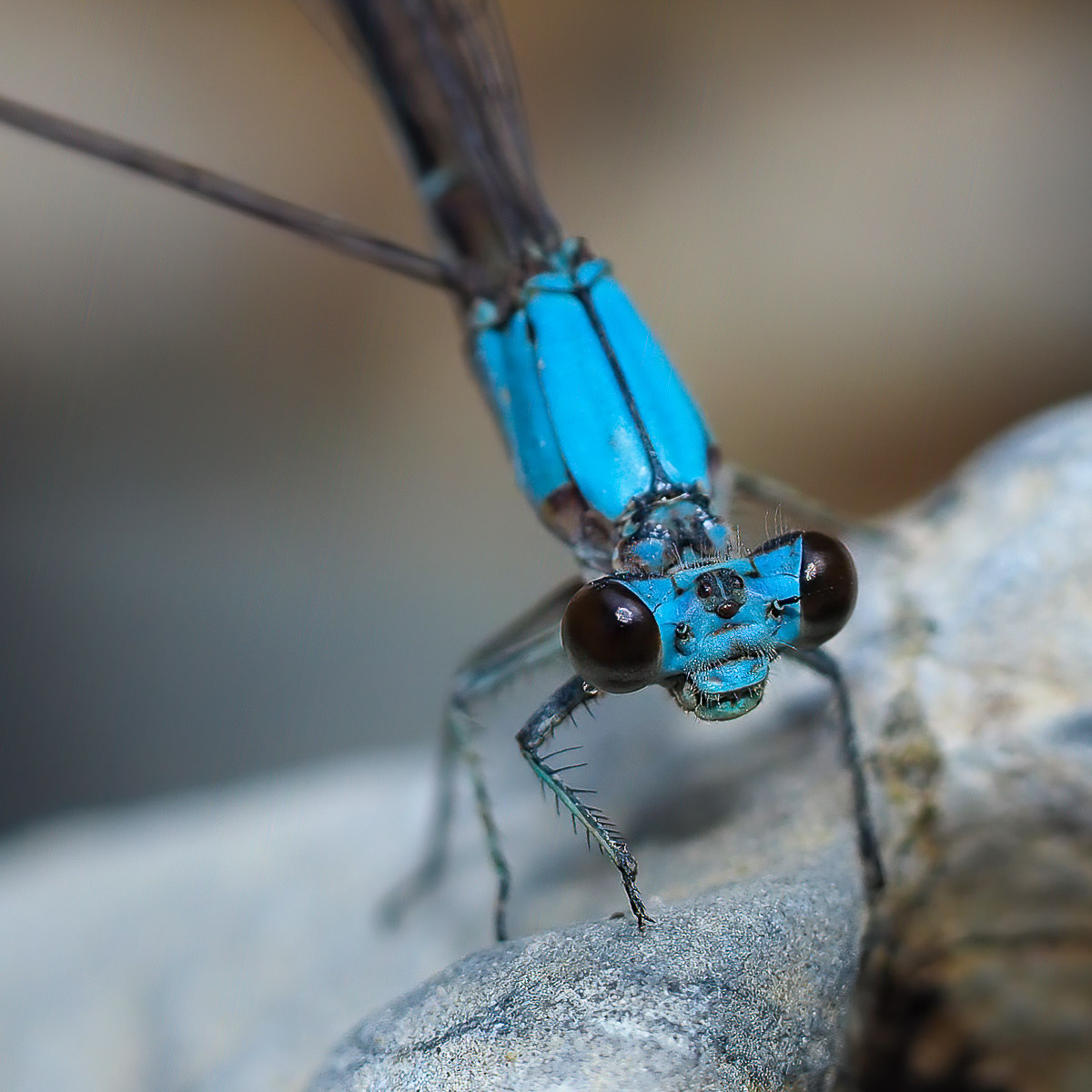 I have been photographing Damselflies for many years now and finding one with prey in its mouth is common. Unlike many insects that have a fear of my camera, damselflies will often stand their ground instead of retreating.

Dragonflies are the much larger relatives of Damselflies in the insect order Odonata. Damselflies have two pairs of wings that are similar in shape and size, unlike the wings of dragonflies that are different in size. Generally, damselflies are smaller and more slender with most in our yard about one inch long. They hold their wings folded back on their abdomen when at rest (except for the family appropriately called Spreadwings). 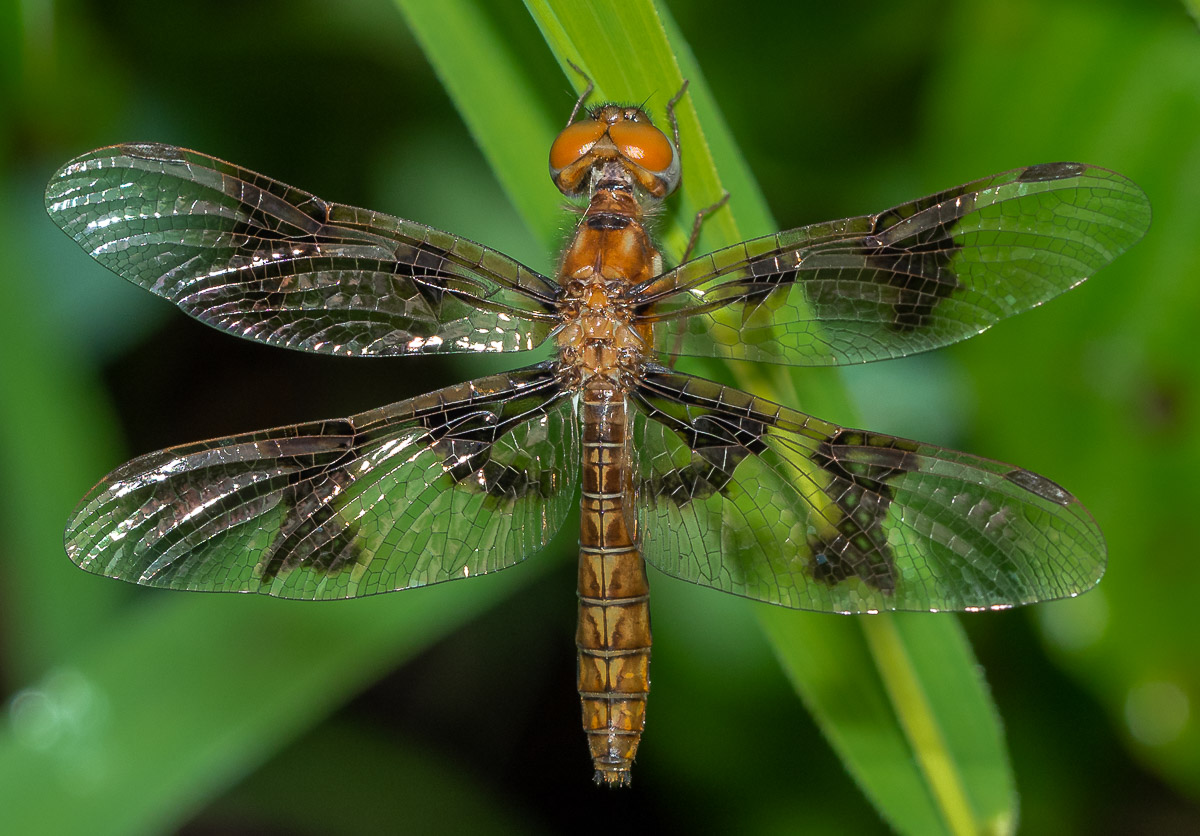 An Eastern Amberwing dragonfly for comparison. The hindwing is much wider at the body and the eyes are bigger and rounder.

Larvae Phase. We created habitat to support damselflies. We built a pond to support wildlife, then we planted it and the surrounding area, and shortly later they just appeared. Damselflies spend most of their immature life as aquatic larvae in ponds and slow-moving streams. We manage our pond “naturally”, thus allowing the larvae to survive year round. They are beneficial, eating other insect larvae such as mosquitos.

Emergence. When a damselfly larva is ready to “emerge”, it will crawl up a piece of vegetation in the pond and complete its final molt where it splits through the exoskeleton. It’s fragile and vulnerable at this point. Wings and the abdomen can be damaged during emergence. Predators, like water striders, ants, and spiders are waiting for them too.

Adult Phase. After emerging, the vegetation around our pond is filled with damselflies and mating begins. The males perch low on dense vegetation in the pond and around the edges waiting for a female ready to lay her eggs. The females stray a little further away from the pond until they are ready to oviposit. The damselflies “roost” at night, sometimes in small groups hanging off vertical stems. During the day, they catch a large variety of small (and not so small) prey serving a beneficial purpose as adults too. 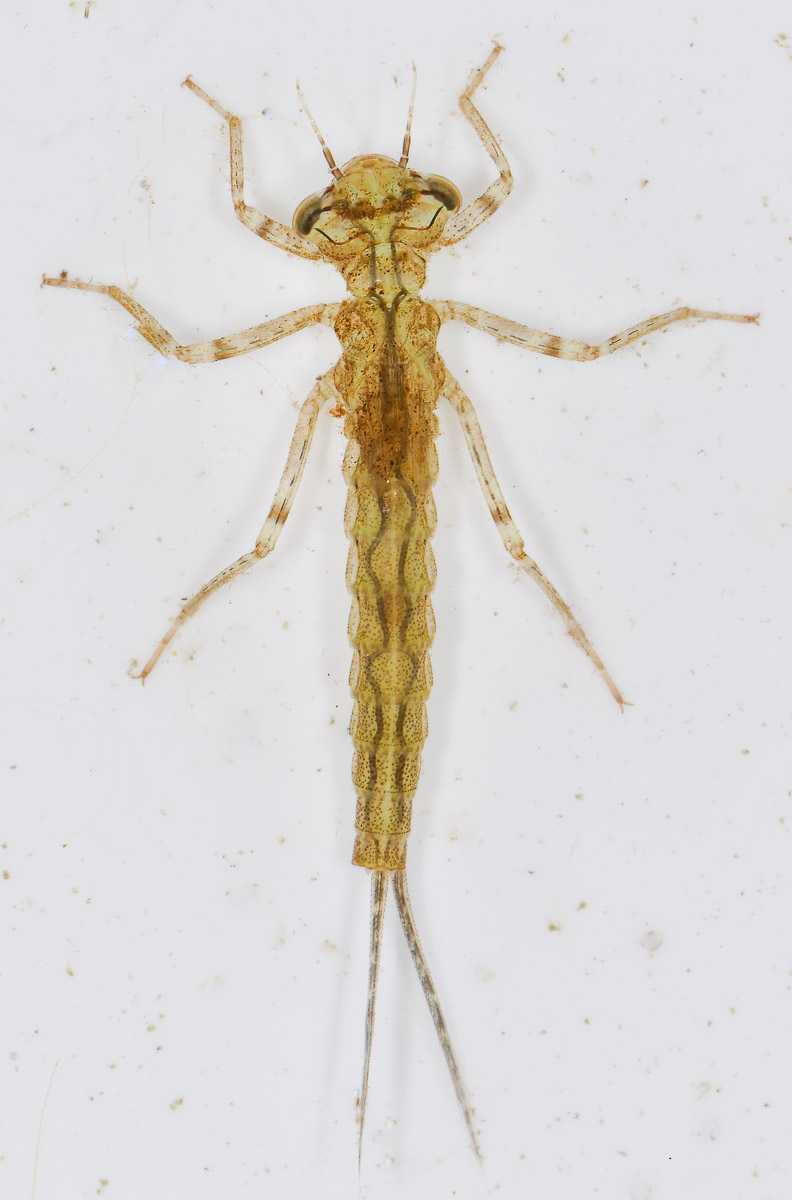 Damselfly larva found in our pond in April 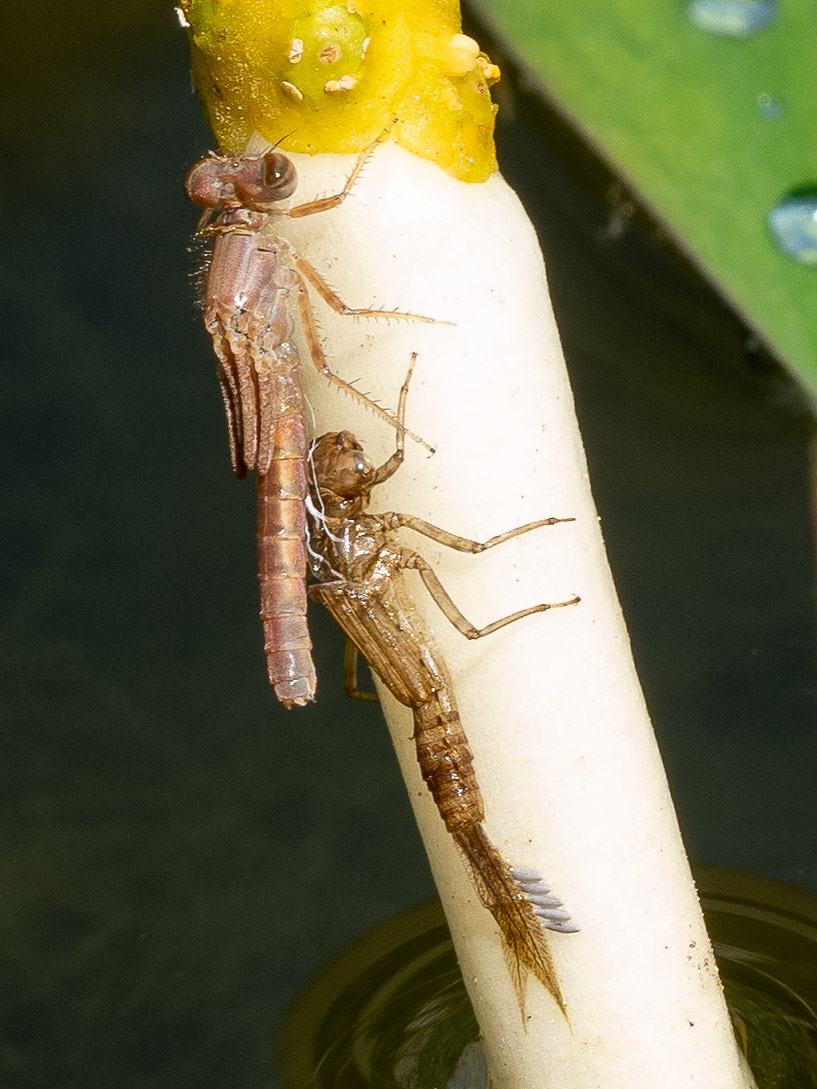 Eastern Forktail's final molt to emerge from its exoskeleton using a Goldenclub flower.

Most of the species we have are Pond Damsels. This family has names like Forktails, Bluets, Sprites, and Dancers. The most abundant species in our yard is the Eastern Forktail followed by the similar but even smaller Fragile Forktail.

There are two additional families - the Spreadwing and Broad-winged (Jewelwing) Damselflies. These damselflies are a little larger and more conspicuous. The Ebony Jewelwing is a stunning find when hiking in wooded areas near running streams. They are mostly dark, but they flash iridescent greens, blues and purples when specks of light hit them through the canopy. The Spreadwings are a little larger and hang off vertical vegetation with partly open wings when resting. It is easy to see that their wings are similarly sized.

We find Eastern Forktails at most natural water sources, so their abundance is widespread. Identification of this species is confusing because the sexes and young have different colors and patterns. They have one look when newly emerged from molting (called “teneral”). The females have three separate color forms – one bright orange immature form, one mature form where it look like a male, and a more typical powdery blue-gray mature form. We figured out early that if we were ever going to discover other species of damselflies in our yard we’d have to start with “why isn’t it an Eastern Forktail”.

Next time you’re near a pond during the summer months, first admire the dragonflies darting about. Then look down and around the edge of the pond closely to admire some of the Damselflies. 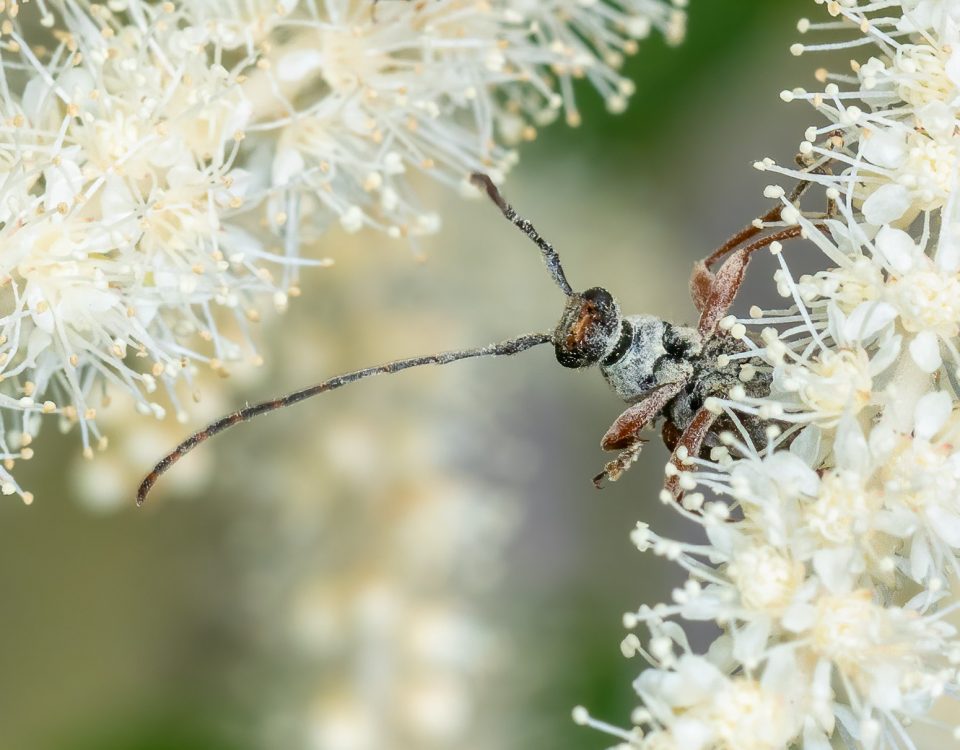 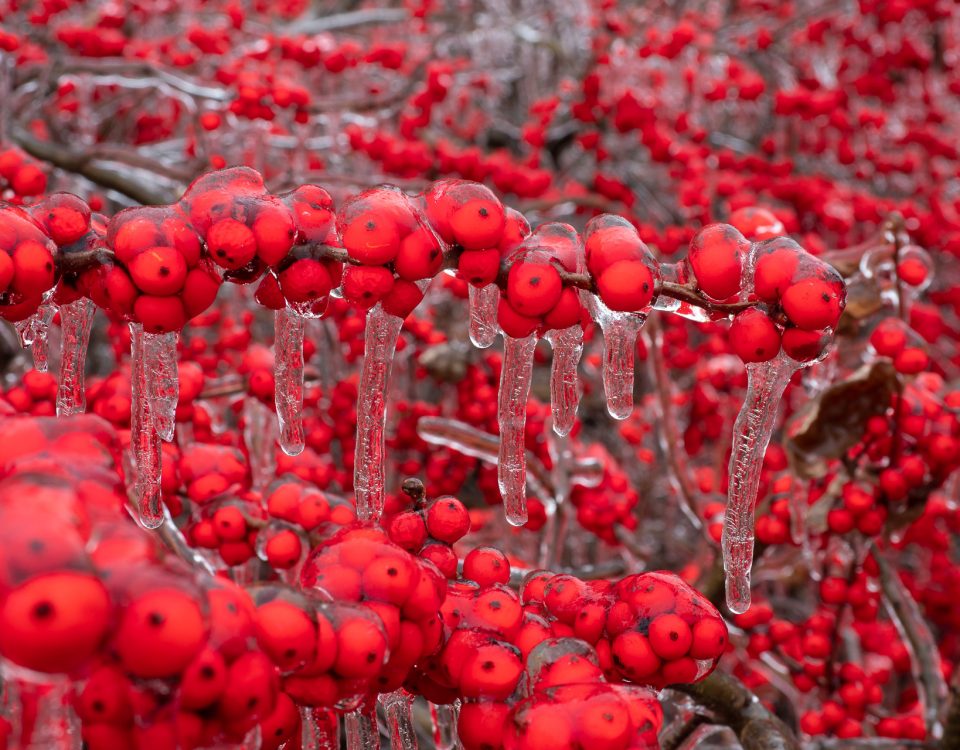 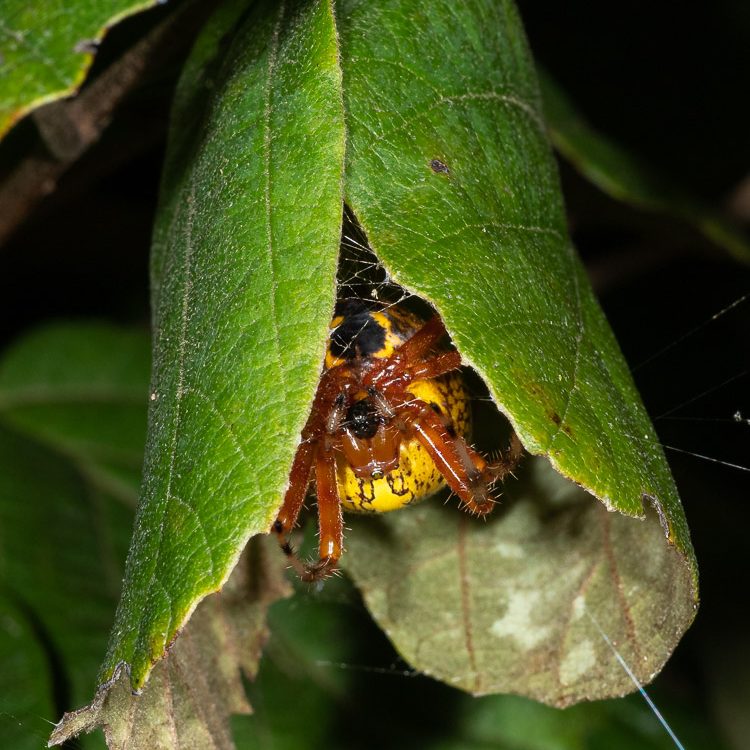